Amos-Vale Hereford stud sold to a top of $15,000 on Thursday and averaged $5916 for 18 bulls from 22 offered, during their 52nd annual sale at Brooklington, Pinkett, east of Glen Innes.

Repeat client and Hereford breeder Greg Gallagher, Red Range - with country at Ben Lomand - was the successful bidder for top-priced Amos-Vale Fairfield N028 by Devon Court Eclipse H190 and will use the bull to help create his own line of commercial sires. Mr Gallagher bought three bulls in total.

Amos-Vale Fairfield, 22 months, placed third in his class at Sydney Royal show this year and presented on sale day as the heaviest in the draft at just over a tonne, or 1002 kilograms, with the highest percentage of intra muscular fat at 6.4pc, eye muscle area of 136 square centimetres, rump and rib fat at 21mm and 13mm and scrotal circumference of 40cm.

Foundation clients going back to 1967, James and Peter Heagney from Wards Mistake, were equal volume buyers and bought three bulls that fit their desire for easy-doing, moderate frame and temperament including Amos-Vale Farlow N031 by Devon Court Eclipse H190 for $6000.

The Amos-Vale sale was conducted by Armitage and Buckley, Armidale, with Colin Say and Co, Glen Innes. Auctioner was Say and Co's Shad Bailey. 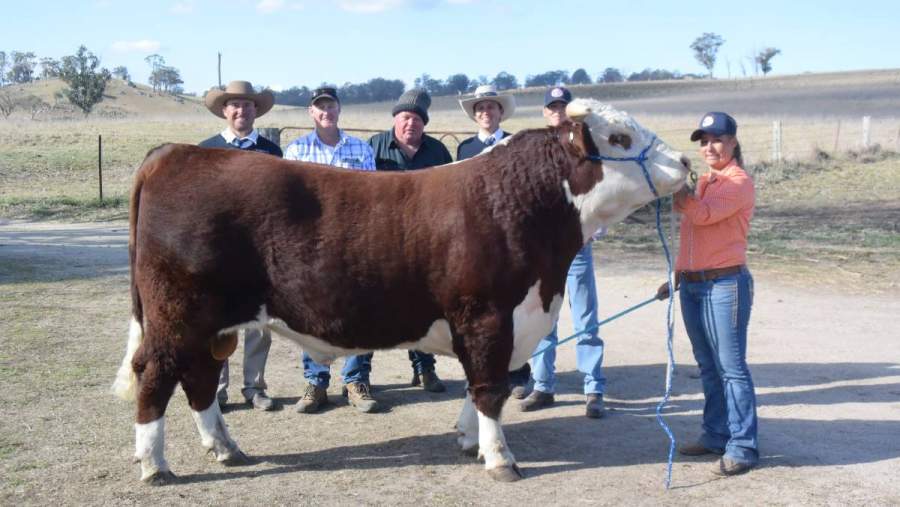